How Highgrove came up with a winning formulation for an organic baby range that even Kate and William will want to use. 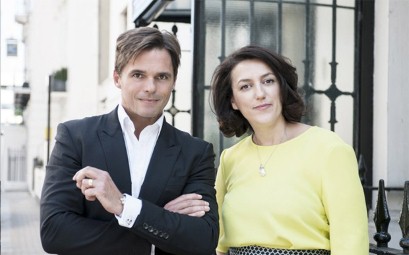 If one is being honest, one has not been overly impressed with the royal baby bandwagon fare thus far. Indeed, to slip out of regal speak, the fashion desk has been darn-right distressed by the dross on offer. So much so, it had decided to ignore all of it - until news reached us that Highgrove was launching its own range of baby unguents and potions.

Like Duchy Originals, which was set up by Prince Charles in 1990 and is now mostly owned by Waitrose and called, in case you hadn't noticed (I hadn't), Duchy Originals of Waitrose, Highgrove has a solid reputation for selling high quality, ethically produced merchandise. If the HRH Prince of Wales, felt it was alright to launch some baby-associated products, who are we to argue?

What really piqued our interest was discovering the people whom the Highgrove team had enlisted to work on this project. Daniel Galvin Jr has been dedicated to eradicating some of the more noxious, unnecessary chemicals from hair-care for the past two decades, winning awards and devoted customers for his organic treatments along the way. While Alexandra Soveral, whose extensive line of hand-blended organic skin, body and hair treatments have often been featured on these pages, is one of those facial massage therapists who is so good that she has clients in LA and New York who wait patiently to see her on her bimonthly trips there from London. She doesn't collaborate with just anyone however. She almost said no to this venture, partly because she was worried about being associated with a Kate 'n' Wills cash-in but also because she feared she might have to cut corners to create the medium-priced line the team at Highgrove wanted.

As it turns out, Highgrove had planned a baby range long before the Duchess of Cambridge announced her pregnancy. Nor have standards been compromised. Soveral and Galvin have delivered five effective, pampering products to nourish the skins of babies, mothers and anyone else who likes delicious aromas and cossetting textures. All are multi-functioning. The orange-water spray can be spritzed on skin or linen. The baby balm can be used on nappy rash, as an indulgent face cleanser, cuticle treatment, stretch mark eraser, and all have been conceived to work together. Mixed with the baby oil lotion, the balm becomes an extra-soothing treat for vitamin-depleted post-labour skin or baby eczema; baby oil mixed with baby wash becomes an aromatherapy bath.

A limited edition hamper, which contain all five products and a (British made) Merrythought Teddy Bear for £190

Far from being rushed out to cash in on those royal connections, both Galvin and Soveral had been independently thinking of launching baby ranges for years. The birth of Soveral's god-daughter Poppy six years ago was the catalyst for her search for organic products that weren't too overpowering. But being a tiny company (just Soveral, her partner Jorj and a small team of masseuses) her launches are few and far between.

Galvin, meanwhile, has been gradually working his way towards a more wholesome modus vivendi since he met his wife Suzanna 20 years ago. Now a strikingly youthful-looking 43, his lifestyle in the Eighties was what he calls "chemical". A sports-loving alumnus of Millfield boarding school, he applied himself energetically to the party scene in his twenties, eventually winding up in rehab. If he'd been clean living from the start, he'd probably look about 12, but that would be weird because he and Suzanna have a 12-year-old, plus Suzanna's 22-year-son. It was having children that made him examine the labels on baby products, and he didn't like what he saw. "A lot of baby bath oils strip the skin and they're packed with sodium lauryl sulphate… it's not only that you shouldn't be bombarding a baby's immune system, which hasn't fully evolved, with synthetics," adds Soveral, "there are many products that are un-necessary. Babies don't need shampoo. Their hair is so fine, they can use baby wash, which is gentler."

Over-zealous use of ''natural'' ingredients can be just as harmful as aggressive chemicals, according to Soveral, since the preservatives in some natural products are ineffective and after being opened a while, the microbial count becomes harmful. "Babies under three months should be given only the tiniest amounts of essential oils," she says. "The formulations are too strong. Even lavender is too antiseptic for newborns. That's why we've used the smallest hint of Roman Chamomile, which is calming and will naturally protect the baby's skin, and the most delicate mandarin oil to support the natural development of the immune system."

Soveral knows her subject. Born in Portugal, she has a BA in Philosophy of Science and the Ethics of Genetic Engineering from London's Metropolitan University, from where she was sent to Aix-en-Provence University for a year to learn to distil oils. She also trained at Westminster University in anatomy, physiology and aromatherapy before launching herself as a massage therapist to learn how skin stretches, ages and reacts to essential oils. Yet for all her scientific knowledge, she still finds herself consulting her mother, who lives on the family farm in Portugal, where Soveral cultivates many of the herbs and flowers used in her own range. "Ironically, the reason I did those degrees is that I didn't want to be known as the witchy, herbalist girl from Portugal. Yet while I've got the science qualifications, my mother knows everything about skin," she says, "She still looks beautiful at 73. Whenever I have a patient with a particularly tricky skin problem, I call my mum. I don't know how she and my grandmother know all they know, but we come from a long line of herbalists."

Galvin also initially rebelled against the family doctrine. His father Daniel Galvin senior (OBE) was a pioneer of groovy British hairdressing, working with Leonard in the 1960s, masterminding Twiggy's seminal blonde androgynous bob. His uncle, Joshua Galvin, partnered Vidal Sassoon. They are hairdressing royalty, descending from a long line of coiffeurs with nary an organic-espouser among them. "My dad initially told me he didn't think my products would work," Galvin (CBE) junior reports with the cheerful air of a scion who has confounded family lore.

Galvin organic hair and body care not only worked, they attracted the attention of Duchy Originals, which approached him to produce a range, which launched in 2001 (HRH is apparently a big fan of the lime and ginger shampoo). When Prince Charles decided to launch a baby range two years ago, Galvin Jr, who became an ambassador for the Prince's Trust in 2003, was the obvious partner. Galvin wanted to work with the best aromatherapy expert around - and he'd had heard about Soveral. The two clicked instantly, and began work on Project Highgrove Baby in 2012.

Developing an organic line from scratch takes years. Luckily Soveral had been working on the formulations since her god-daughter's birth, and thanks to the indefatigable work of her partner Jorj, managed to source the ingredients which are either grown in the UK or processed here, in record time.

The biggest challenge was keeping prices in the £25-30 range. The ingenious simplicity of the range helped, as did economies of scale. After the launch in Highgrove stores and its website, this goes global in November. There's a limited edition of hampers, which contain all five products and a (British made) Merrythought Teddy Bear at £190 (pictured). As Galvin says, it makes a pretty good baby shower present from a group of friends clubbing together

HRH, aka The Boss, as his team call him, was consulted at each stage, a seamless process apparently. The Boss liked everything. As for Kate and William - all Galvin will say is that out of the 250 numbered hampers, the first one has already been taken. I think he means The Boss stumped up. This is Boss approved, Kate 'n' Wills approved and Soil Association approved. Above all, it's Alex Soveral's Mum approved.

Designed to provide the healthiest environment for skin to thrive